how many of you did not know that it is Columbus Day..?….. went to the bank did ya, ? ,,, surprise , the post office is closed too although this is at least one day that I won’t receive mail that doesn’t belong to me.

This is a carving I did of Columbus . This celebrates his later life after being an explorer, when he opened a soup and sandwich bar in Verona Italy . Here he is shown serving a bowl of hot pasta soup. His place was called Pasta-Mucho-Mucho. 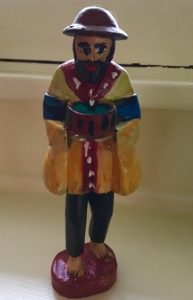