i have a lot of new paintings but they are all of bob Dylan.

thanks for your support.!

its cold here in the South….

I need to stoke up the fire under my whiskey still and kill another hog,

so we can have ham sandwiches till summer time. Then I will move to my summer home in

Kennibunk ,Maine where I cut bait for tourists who go on fishing boats.

its steady work but it stinks. 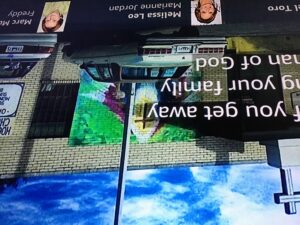 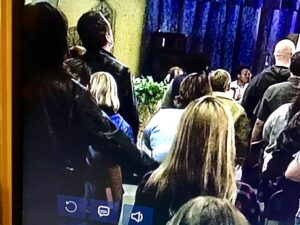 This is from when I was in the film 21 GRAMS with Sean Penn and Bennecio Del Toro , I mighta spelled his name wrong…look below.

……see that photo on the top, the big green part .with the cross,,.it has a version of Jesus on it, I painted that for the movie….there was a lot of rain, I barely had time…I got paid good for the painting and 50 dollars to act.

, in the other photo I am closest to the back , on far left in the black jacket and black hair., in the halfway house church scene. This whole building is now demolished. It was in downtown  Memphis.

It was an exciting shoot, the director, the guy who made Amores Perros, or however it’s spelled, I loved that movie…I got to be friends with the art director and The Director..He works really fast..his name is  Innaritu ,..

none of that all day waiting to shoot one stupid scene. He moves fast…

i became friends with some of the actors, they are mostly douche-bags. The director Innaritu also made The Revenant, one of the all-time greatest films,  he is one bad-ass director.!

i was in some other scenes but I think they were cut.

thick wood..kinda heavy..hanger on back …about 22 x 25 or something close… I have Hunky Dory and Ziggy Stardust on […]

End of the world..

You don’t want this…don’t even look at it..I’ll go back to painting endless john Prine and bob Dylan’s.. oh yea..and […]